Programming for fun and profit

A blog about software engineering, programming languages and technical tinkering

Welcome to the second part of the TornadoFX+Exposed series of articles. In this part, we'll take a look at how to create a TornadoFX view for the Categories table. In the next part, we'll expand upon the view and make it possible to add, edit and delete rows.

The full source code is available on GitHub

To be able to view the Categories table, we're going to need three things:

We will do all of this in a new file called categoryview.kt. Let's start with the view model, as it is by far the simplest component.

An ItemViewModel wrapper for Category

For this, we'll extend a utility class called ItemViewModel (you can read about it in detail in the TornadoFX guide. It will simply look like this:

This is essentially a proxy for the Category class, acting as a middle-man between the presentation layer and the database access layer. Any change we make to a CategoryModel in the GUI will be stored in the model alone, and will only propagate to the underlying Category object when we commit the change(s). This is very convenient, as it allows us to buffer changes and then commit all of them in a single database transaction, instead of having one transaction per change. Now, let's move on to the controller.

The controller is also fairly simple. Initially, it will only be able to fetch items from the database. In the next article, we will extend the controller with add and delete-functionality. Here's the initial version of the controller:

The categories property is lazily initialized to a fetch from the database, in which all Category DAOs are wrapped in CategoryModels. There's a bit of a trade-off here: it's more efficient to fetch the whole table only once and then maintain the state with any objects that are added or init contains precisely the same database connection setup that we used in the first article. Let's move on to the actual view.

For the table view, we're going to use a TableViewEditModel instead of a plain TableView. The reason is that the TableViewEditModel has some additional functionality, most notably the ability to edit rows directly in the table. Again, you can read up on the details in the TornadoFX guide. Our initial attempt looks like this:

There's not too much going on here. The three properties store references to the controller, the table view, and the list of categories. The view itself is not very eventful either, we simply fetch the categories using the controller and initialize the table view. Note that editModel and items are properties of the TableViewEditModel, where the former is a reference to the table and the latter the property containing the items of the table (which we set to the categories observable list). Later, when we wish to update the table, we simply work with the categories list. Don't worry that there are some unused references here, we will put them to use in the next article.

Now, we just need to make the app runnable. That's as simple as adding the following:

Running the main method will start the app, and you should then see a view that looks something like this: 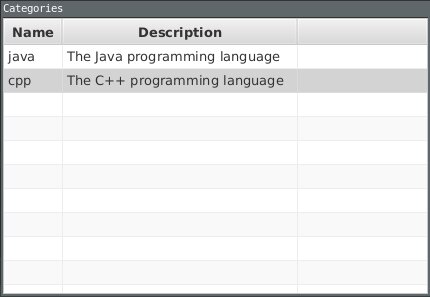 That's pretty much it for this part. In the next and final part, we'll look into how to add, delete and edit rows of the Categories table. You can find part 3 here.